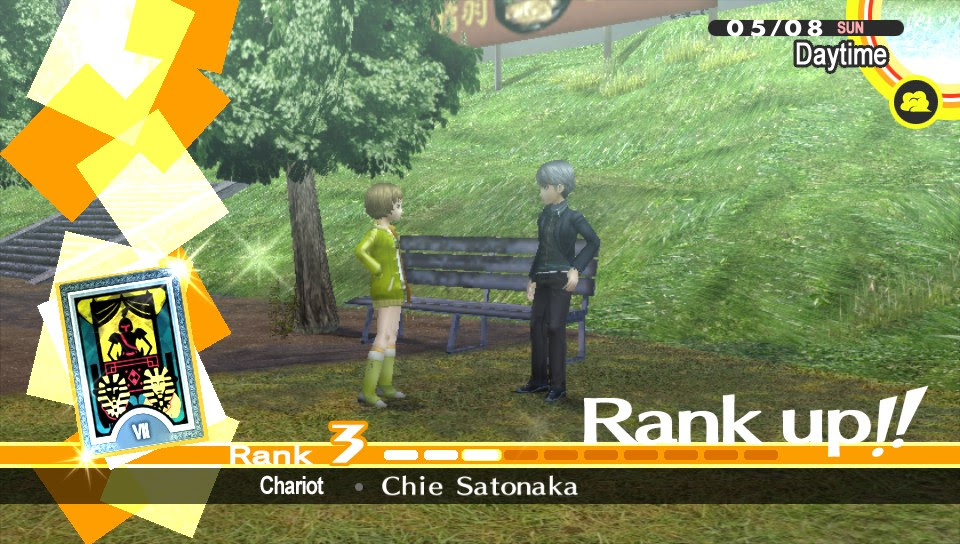 Warning: Spoilers ahead for Mass Effect 3 and Persona 4 Golden.

That was the last time I can remember being as horrified by the unintended consequences of my actions in a game as I was when picking the wrong dialogue option in Persona 4 Golden resulted in my character cheating on his existing girlfriend.

These outcomes are on different scales, of course - high school romantic melodrama isn't in the same league as genocide. But in both instances I felt "betrayed" by the game system's interpretation of my actions and intent.

Character relationships in games often feel like there's a track, with hate on one end and sex on the other, and you move along that track in either direction based on whether you pick the Right or Wrong dialogue option1.

Firstly, it assumes that the way into anybody's knickers (and parts beyond) is just to be nice to them. Say reassuring, friendly, supportive things to someone and you'll get your very own 30-second cutscene of mannequin lust with them. Aside from being predictable and boring from a gameplay and mechanical standpoint, it's reinforcing the increasingly creepy Nice Guy Syndrome, where simply being a decent human being is assumed to entitle you to sex.

Secondly, it assumes that the only reason I could ever want to be nice to someone is to get into their knickers (and parts beyond). In Mass Effect 2, I suddenly had to ABORT my way out of a conversation with Miranda because my natural reflex of picking the Paragon dialogue options suddenly had my Shepard hitting on her. In Persona 4 Golden, I attempted to comfort a crying friend and suddenly found out that doing so meant that our relationship had become "intimate"2.

Why can't games assume that I'm being considerate and friendly without automatically heading down the romance path?

1 In Persona 4 Golden, as near as I can tell, you can only move in the positive direction - other games, like Alpha Protocol, will allow your friendships to deteriorate if you're inconsiderate during conversations.

2 Apparently the correct, friend course of action is to just stand there and watch them cry their eyes out on the f--king street.