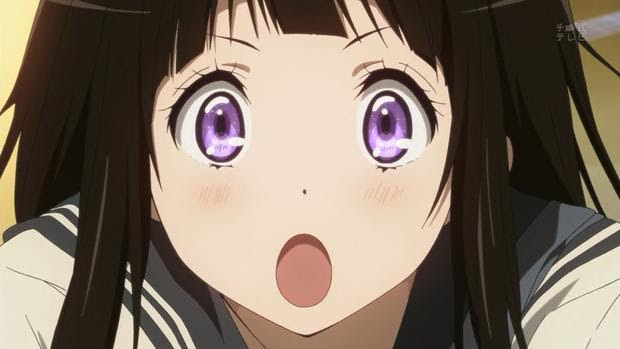 I'm pretty sure I figured out what was really going on in Hyouka at the exact same moment as the main character. This is rare in anime, and especially in mystery shows - generally speaking the audience is either way ahead or way behind the characters, thanks to the uneven distribution of information available on each side of the screen.

Succinctly described to me on Twitter as "a mystery show about nothing of any consequence", Hyouka follows the Classics Club, dragged through puzzle after puzzle by the infinitely-curious Chitanda Eru. Their secret weapon is Oreki Hotaro, supremely observant and insightful, but also hopelessly lazy (or as he'd call it, "efficient"). The mysteries they solve are ultimately irrelevant even to those directly involved; a 60-year-old school expulsion, unimportant items missing from the cultural festival, a hot springs "ghost".

None of the cases matter much to the plot either, except for the way they bring the characters together and force them to change or re-evaluate themselves. The hot springs episode, remarkably restrained for anime generally and especially a KyoAni production, flipped a switch in my brain; I'd been enjoying the show up to that point, but one scene clicked the point into place in a way I couldn't have seen.

High in the running for my favourite anime scene of all time is the haircut scene from Full Metal Panic! The Second Raid. It's not action-packed or even especially well-animated, but the characters' history makes the atmosphere electric. There's a bottle episode of Hyouka that stretches a similarly-charged emotional current out over the entire 22 minutes.

The final scene in the final episode is one of the strongest emotional gut-punches I've seen. Incredibly sad, beautiful and hopeful all at once, it still gets my heart racing to think about it. There's no indication of a continuation yet, and with the shift towards anime-as-advertising1 we might never see more - especially since there's only one more novel to adapt at the moment (the 22 episode series covers four).

The slow-burn nature of the show could be offputting for some, but even when they were spread over three or four episodes, the characters made everything worthwhile. They're almost mysteries by themselves; there are suggestions and hints at the backstories of and between the Classics Club members, and I had more fun trying to work them out than the cases they were trying to solve.

1 The increased number of shows based on manga and light novels isn't (simply) a drought of ideas, but instead the animated versions are used to promote the higher-profit-margin original source material. Which is an awkward position - if the anime doesn't increase sales of the novel, there's no point investing in more; if it does, then the show did its job and why bother with a second season?