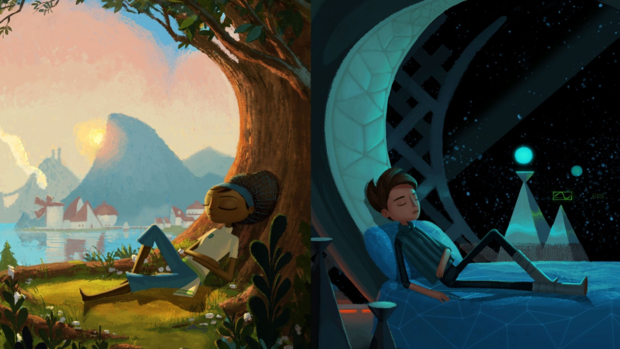 I've never been a massive adventure game fan. I've only completed The Secret of Monkey Island, Broken Sword and Grim Fandango; I usually get stuck, then frustrated, then bored and abandon them.

Basically, I'm not any kind of authority on the genre - but Broken Age, I like.

I love the character-swapping mechanic. A couple of times I've gotten stuck in one story and jumped to the other just for a break, but the new perspective lets me progress further to the next apparently impassable hurdle - at which point I switch back and discover what I was missing before.

I can't help wondering how you construct puzzles like this when writing or designing an adventure; maybe it's my recent attempts to write an RPG setting that makes me appreciate the complexities better, but one chain of events in particular tonight had me in awe of the cascading discoveries, conversations and inventory items to progress. How do you put this together without it feeling totally illogical? The solutions are so specific, but getting there, when the flow is going, feels totally organic.

The script, too, is great. There's a very different tone in the two stories; Shay's mostly on his own in familiar locations, or with characters he already knows, while Vella has covered much more ground and met many more people. So far I think I prefer her adventure; some of Shay's has felt more mechanical, with repeated "missions" and a minigame I'm already dreading the return of.

I have to keep reminding myself that this is only the first part of the story, though. I'm trying really hard not to get so invested that the inevitable cliffhanger will make the wait for episode two unbearable.

I've already got enough of that with The Walking Dead.