All This Has Happened Before 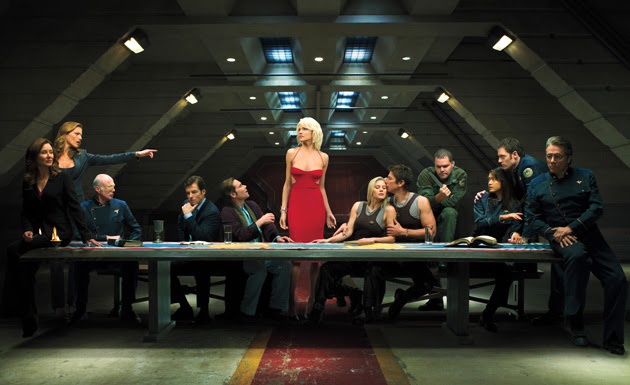 I will admit to being a little disappointed with the ending of Battlestar Galactica. Not as disappointed (or enraged, as the case may be) as some "fans" were when the final season came to a close, but it did feel like the religious implications made by the finale were somehow out of place with the rest of the series.

Having rewatched the first season-and-a-half over the last couple of days, I'm not stunned that any of us expected anything other than a faith-heavy conclusion.

There is so much stuff that can only be explained by supernatural forces at work, if not full-blown divine intervention. Gaius Baltar's continued existence can only be the result of either the least-believable chain of unbelievable luck, or the hand of God. The visions of Laura Roslin and the predictions in the Scrolls of Pythia are too perfectly-aligned to be mere coincidence.

I suppose the "dumb luck" theory could hold more weight if there was any evidence in the show of anything other than divine intervention that could possibly explain how Gaius knows the things he does ahead of time (told to him, in most cases, by Head Six - who calls herself an Angel of God's Will on at least one occasion), how Leoben predicts the fleet's discovery of Kobol, or any one of the dozens of prophecies that come true.

I recall the third and fourth seasons drifting away from the spiritual focus of the first two, so maybe the shift to "proper" scifi was a bit of a bait-and-switch. But sitting through the early part of the show again, the ultimate ending seems much more appropriate than it did at the time.

Which isn't to say it's perfect; I don't like how upbeat a lot of it is, and the modern-day coda with the Baltar and Six angels in New York is really dumb.