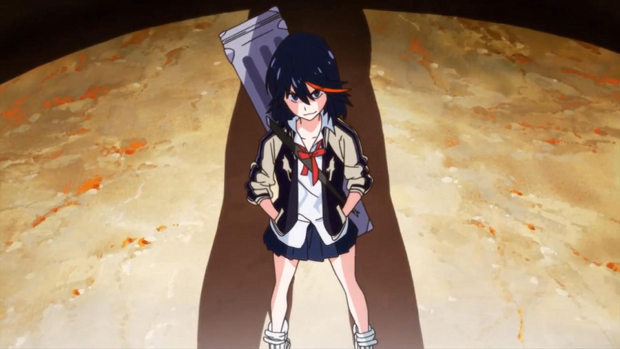 Cards on the table: I f--king love this show.

Even knowing that it's a product of the minds behind Panty and Stocking and Gurren Lagann, the energy, style and above all else the confidence exploding out of every frame is incredible; the fight choreography is a step above almost anything I've ever seen in animation, even if the budget doesn't quite do it justice.

But there's a lot of subtext to the story that makes me… not uncomfortable exactly, but unsure of my footing.

Ryuuko Matoi's father was killed by a woman wielding a giant pair of scissors. Taking one half of the weapon, left behind by the murderer, Ryuuko travels around from school to school attempting to track down the killer and avenge her father. When she arrives at Honnouji Academy, Matoi is quickly defeated by the unreasonably-loyal followers of the school's Student Council President, Satsuki Kiriyuin; retreating to her ruined former home, Ryuuko discovers a hidden basement containing a sentient "Kamui" school uniform that forcibly bonds with her1, granting her incredible power which allows her to face Satsuki and find out the truth about her father's murder.

Everything I love about the show - its visual flair, its swaggering confidence, the character designs, the voice acting and that music - is almost single-handedly defeated by the costume design for the Kamui uniforms. Requiring a blood bond with their wearer, the Kamui (神衣, literally "God's Clothing") transform their wearer into a fighter of incredible power, but also leave them literally exposed - something the camera never lets you forget while watching.

But at the same time, the arc of the first three episodes comes really close to almost justifying the skimpy appearance of the transformed Kamui.

There are several threads do you see what I did there running through the show - facism and the immutable power of the state (or any kind of government, even a student council); clothing as an indicator of status (and as a way to control the availability of that status)2; and accepting yourself regardless of the opinions of others. All wrapped up in a hyper-kinetic, highly stylized action show with more violence and fanservice than is probably healthy.

It's proved impossible, so far, for me to articulate why I think there's more to Kill la Kill's skimpy outfits than it first appears. Some defences - notably the "equal fanservice" argument referring to a particular male character's penchant for nudity - are so wide of the mark as to betray some worrying psychology in those making the argument. I don't buy the idea that the nudity required by Ryuko's fully-synchronised Kamui is empowering to her, either - the show makes it clear early on that, if there was any other option available to her, Ryuko would take that over the demon stripper outfit (that link, by the way: NSFW).

There's an interesting take on the empowerment thing (from a female author) and how the show might be useing (or negating) the male gaze, which I don't entirely agree with, but then there's a lot of interesting theories about what the different aspects of the show mean. I don't think it's the kind of show that has any real answers though - we're unlikely to ever hear the Word of God about any of the symbolism.

But for (almost) every shot that seems overly gratuitous, there seems to be a line or a shot or a hint that there's more to the fanservice than the surface level would have you believe.

Or maybe I'm trying to justify why I'm still watching, and reading more into the show than is really there to do it.

1 This is probably the only really indefensible part of the show; while nothing is shown, the dialogue is obviously referencing a particular kind of scene, but there's no possible reason for it except as a punchline - which misses the mark, for me.

2 Honnouji Academy's Student Council distributes special school uniforms with the capacity to augment the wearer's natural abilities. The Japanese word for "uniform" (制服) is pronounced "seifuku" - the same as the word for conquest (征服).