Not quite Sesame Street

Does anybody remember seeing this really weird news story? The Hamas-run al Aqsa TV station in Palestine used "Farfur", a Mickey Mouse look-alike character, to spread anti-Israeli propaganda to its children. The show featured a strong pro-Islamist slant, as well as encouraging young viewers to phone in and sing anti-Israeli songs.

The arguments kept going back and forward, with the Palestinian government eventually ordering the show off the air, although al Aqsa didn't comply in the end.

They did, however, kill the character off. 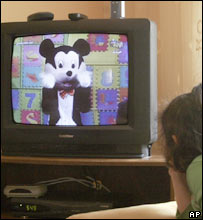 The Hamas-affiliated al-Aqsa channel aired the last episode on Friday, showing the character, Farfur, being beaten to death by an "Israeli agent".

In the final broadcast an actor said to be an Israeli agent tries to buy the land of the squeaky-voiced Mickey Mouse lookalike.

Farfur brands the Israeli a "terrorist" and is beaten to death.

He was killed "by the killers of children", Saraa says.

In an earlier show, Farfur had said: "You and I are laying the foundation for a world led by Islamists.