Why, she wouldn't even harm a fly 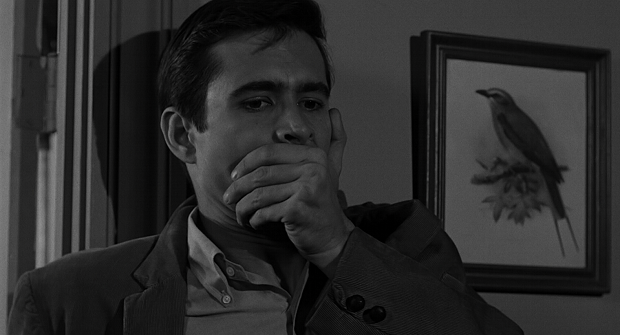 I was going to watch the second episode of Bates Motel tonight, but since I've... acquired a copy of Hitchcock's film since watching the pilot, I decided I should probably watch it before getting too far into the TV prequel1.

There are a number of things that surprised me about it. Firstly was Anthony Perkins, whose performance as Norman Bates is just miles ahead of everybody else in the cast. They all feel like stage actors performing, but Perkins just is Bates, all nervous ticks and charm and anger. I remember being impressed with him the last time I saw (the first half of) Psycho, but I'd forgotten how much he inhabits the role.

Second was the dialogue - while some of it was a bit clunky and This Is Exposition, there are some very modern exchanges (or maybe it's just that Perkins delivers it so well). I'm not entirely sure what I was expecting; more formal language and rigid exchanges, maybe? One thing that did strike me was the overwrought explanation from the psychiatrist at the end - maybe five decades of thriller and horror movies since has spoiled a current audience, but I felt a little bit condescended to by his spelling out every element of the twist.

I'd also forgotten how beautiful a black-and-white film can look when it's shot right. Catherine described it as "colourful", which seems oxymoronic, but you can almost see the hues leaking into the picture even though it's all just different shades of grey.

I'm not sure I'd have enjoyed Psycho so much if it wasn't for Norman Bates, though. Knowing the reveal before it happens can be the death of a thriller unless it's well-made and -acted, and despite the production values I'm not sure there's enough to hold my interest without Perkins' performance. I was kind of bored by any scene he wasn't in.

1 There are a few continuity errors between the film's account of Norman's childhood and the TV show's, as well as some minor (but interesting and possibly deliberate) differences with the layout of the house. I don't think it's going to be problematic for the show though, since it's obviously set "now", rather than pre-1960.