The Monster Sat Beside Me 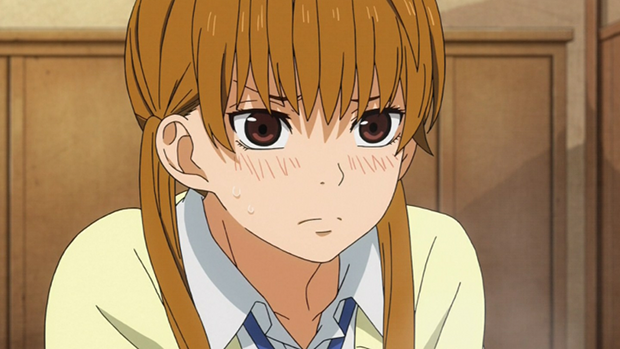 I don't know why I'm so hesitant to watch shows on Crunchyroll. I'm paying a subscription and can watch anything on the service without additional cost, so it strikes me as odd that there's so much stuff I would pass by without even giving the first episode a shot.

One of the shows I'd been not-really-avoiding for a while was My Little Monster. I don't know what made me give it a try, but it really surprised me. It's a pretty standard shoujo setup - budding romance between bookworm and delinquent - but there are a few things that made it stick out for me, which I'm going to try and explain later.

But first the easy stuff: it looks great. I really like the character designs, and the colours are brilliant - not too bright, but not too pastel either. And there's something really arresting about the way everything's outlined, but I can't quite put my finger on why.

The music's a bit cliché, the acting's a mixed bag - I'm not a massive fan of Haru's accent, for one - and a lot of the subplots are very predictable. I'm not sure if there's more to come, though; I've watched all 13 episodes available on Crunchyroll and there's a lot of stuff left kind of open, having just been properly set up in the closing episodes.

What's most interesting, and I can hardly believe I'm typing this about a shoujo comedy-drama, is the relationship between the two main characters. It's always the driving force of the series in this genre of course, but what makes My Little Monster so interesting is that the relationship that Haru and Shizuku are trying to build is obviously never going to work out.

Haru - the delinquent in this equation - has a particularly violent streak that, on more than a couple of occasions, directly results in physical injury to his would-be girlfriend Shizuku. He's also frighteningly obsessed with her and aggressively jealous, especially when she's attending cram school, in the latter part of the series, along with a potential romantic rival.

The show tries to explain away Haru's worrying obsession with Shizuku by giving him a "mysterious loner" past, and making her the first person to look past (or rather, ignore) his renegade reputation. As a result, he's more or less imprinted on her as his First Real Friend, which makes his almost-immediate declaration of deep love seem particularly worrying - even leaving out the stolen kiss that seems to have become a trend recently in these shows1.

The only thing that stops it turning into a fully abusive relationship - and not by much - is that Shizuku can give as good as she gets; she's very self-assured, has no problem telling Haru to back off, and he obeys when she gives him an instruction - although that does tend to switch on his "sulking child" mode. And while Haru's obsessed with her, Shizuku's got little time for anything other than studying and almost resents Haru for taking her away from it.

But if those warning signs weren't there - and despite the grim picture I've painted above, there are plenty of scenes of genuine warmth and affection between the pair - neither Haru nor Shizuku seem to know how to construct a proper relationship. Neither has had any friends before, so their feelings for each other are bound to be confused and overwhelming. Haru, for his part, seems to believe that single-minded devotion to his pursuit of Shiuzuku is enough to guarantee a happy ending for their story; meanwhile Shizuku admits herself that she almost expected her confession of love to be enough on its own, after which she could go on with her life exactly as it was, but with her Haru relationship as well - having her cake and eating it.

As the series progressed, it seemed more and more likely that the relationship wasn't going to get where either party wants it to be, but neither has a particular interest in trying to improve it. I'm really hoping, if the show continues, that it has the balls to admit that they don't work as a couple - but it's also difficult to see how they'd justify Haru's reaction in that instance. If he was a real person, he'd probably start stalking her - or worse.

1 I really don't like jumping straight from "kiss" to rape culture, but if the broader message here is that kissing a girl when she doesn't want or expect it is going to make her realise her unrecognised feelings for you and start a whirlwind romance, then there's got to be more than an eyebrow raised.