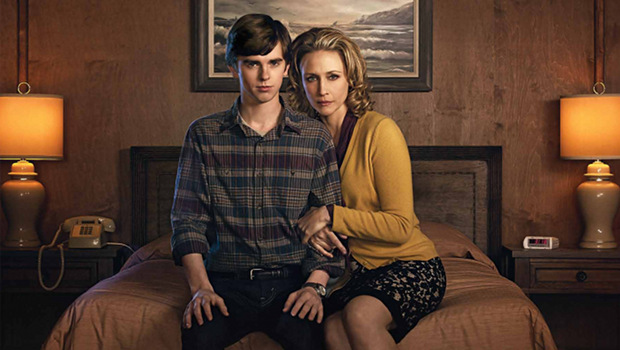 It pains me to admit this, but I've never seen all of Psycho. I've seen Hitchcock's original more or less up to the exact point that I've seen Gus van Sant's remake from, so I know the whole story, but I've not seen it beginning-to-end.

There's something about the prequel TV show Bates Motel that's similar to that experience, though. Norman and his mother dress, speak and act like characters from the 1960s, but the rest of the world is definitely very contemporary - everybody, even Norman, has an iPhone.

The series was totally off my radar until earlier today; while I was aware of and looking forward to Bryan Fuller's Hannibal series, if I was ever aware of a Psycho prequel I can't remember it. Reading the Badass Digest review (and comments), I was totally intrigued.

Beware! Minor-to-medium spoilers ahead. Short version: Bates Motel is worth a look.

Before Bates Motel, I'd only seen Vera Farmiga in Source Code, but she is a force of nature as Norma Bates. She lurches from eerily detached to creepily over-attached on a dime, enraged and apologetic and loving and controlling and manipulative and everything else that you'd have imagined Mother to be. She looks young and then old and everything in between, bouncing around excitedly showing off their new home to Norman, but the figure of stern authority when his friends show up at her door.

Norman's a much harder character to read, but that's part of what drew me in. Freddy Highmore is another actor I'm only passingly familiar with, but he's spot-on with the ambiguous friendliness and inner distrust. He gets a lot of very immediate female attention from his classmates (I can only remember one male peer with a speaking line), which strikes me as an unreliable narrator - there's a definite impression that he's not had much experience dealing with other kids his age, and I'm willing to bet there's some reading-too-much going on.

It's not without its problems, of course; a couple of lines are really awkward (Bradley's "deep lake" is eye-rollingly awful, but in context her character might be high as a kite when she says it) and the music is intrusive and melodramatic in one particularly difficult scene, which would have been much more powerful and horrific without any.

That scene, a violent rape, is of questionable story importance and seems primarily to exist as an excuse to have a murder in the pilot. If the lead-in, the scene itself and the aftermath weren't so fearlessly performed by Farmiga it would have been enough to destroy the show. As it is, it's a bit pointless without the emotional followup between Norman - who'd snuck out of the house against his mother's instructions - and his mother being more strained. They both get over it very quickly.

Which is one of my two main problems with the episode I expect the opening scenes, my other issue, will be revisted at some point throughout the series to resolve some of the questions it raises. The rape, murder and cleanup, on the other hand, set up the relationship between Norman and his mother as being much more equal than I was expecting. While there are elements of her dominance throughout the episode, the one time she really puts her foot down he disobeys her and she pays the price but Norman isn't really affected apart from being an accessory after the fact.

But there's plenty of time for things to change. There are hints throughout the episode that the town where Norma has opened her model is more troubled than it seems on the surface, and there will undoubtedly be plenty of things to strain that relationship. If nothing else, Vera Farmiga's performance has put the next episode firmly on my list of Stuff I Need To Watch, and unless there's a nosedive in quality next week I'll be sticking around for as much as they make.