Warning: minor spoilers for The Fugitive - although it's 20 years old this year, so it's close to the statute of limitations. 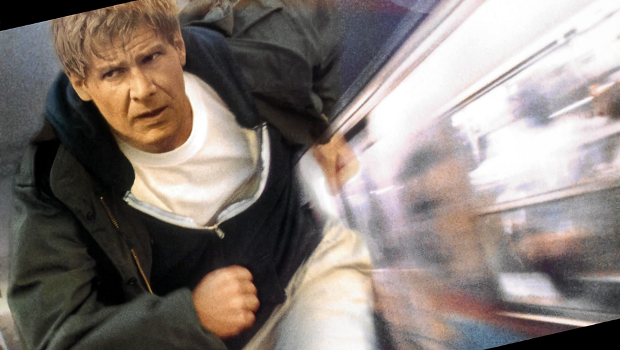 I saw The Fugitive in the cinema. I would have only been ten, and watching it earlier tonight it struck me how much of it must have gone over my head. Not just the (overly-complicated) pharmaceutical conspiracy stuff, which I can't imagine myself having context for; even now there are bits of the dialogue I'm catching properly for the first time.

The best lines and scenes are all Tommy Lee Jones', but that's almost certainly just because he's got other characters to talk to. Harrison Ford spends most of the film looking tired, worried and angry (apart from the end where he looks tired, worried and relieved), and for the most part doesn't exchange more than a few words with anybody.

The exchanges between Kimble and Gerard, though - the tunnel at the dam and a phone conversation from the one-armed man's house - are brief but great, and actually do a lot to cement the characters' motivations. Gerard's "I don't care" line is an important one because it'd be easy to forget that his job isn't to solve a crime - it's just to catch the fugitive. It tells Kimble, and the audience, that his innocence or guilt is irrelevant and that Gerard won't be put off by any new evidence Kimble can find.

I don't think I have words or the time to praise Tommy Lee Jones' performance in this film enough, but the US Marshalls altogether are so natural, their back-and-forth jokes so easy, that I'm not sure how much of it was actually scripted. Given the seriousness of the story as a whole and the role of the Marshalls in it, they actually bring most of the levity that's present in the film.

There's not much I don't love about the film: the music's great, the dialogue is mostly pretty snappy (there are a couple of exposition-y flashbacks that creak a little), and I lost count of the number of times watching tonight where I said "this next bit's great!". Even though the pacing is odd, ramping up the tension in bursts - Kimble nearly gets caught and narrowly escapes at least three times - it flows remarkably well, with the stakes getting higher the closer he gets to the truth. The final explanation for the murder of Kimble's wife is a bit weak, but it's hard to imagine a random home invasion would have made for as compelling a search for the one-armed man.