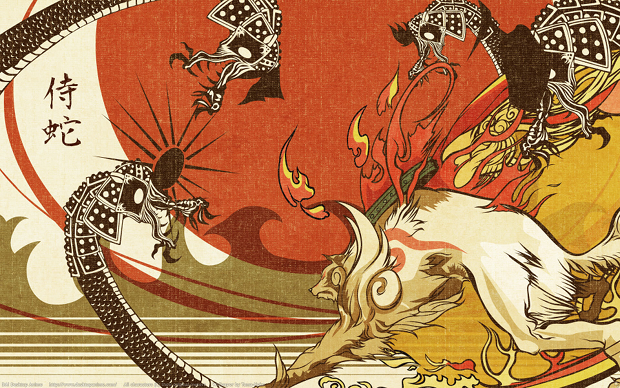 I'd been tempted to pick up Okami HD on the PSN for a while now, but three things stopped me, to varying degrees.

My cheapness has paid off: it's one of this month's Instant Game Collection titles.

I first played - and completed - Okami on PS2. I've tried to restart it a few times since, both on the PS2 (and PS3, via emulation) and on the Wii port, but I never managed to get far.

This evening, I collected five of the brush techniques and am about to leave the first overworld area, in just under three hours.

I'd forgotten how quickly you accumulate new techniques early on - it seems to be throwing new stuff at you all the time, and I've not even hit the first proper boss yet.

I know, however, that the latter stages of the game are a total slog, with repeated bosses and a couple of weird story turns, and the breakneck pace of the opening areas probably doesn't help that sense. It was often described, on its release, as the best Zelda game in years, but Okami's not content to introduce you to new skills one dungeon at a time early on, but ends up running out of stuff to teach you.

The HD port - by Hexa Drive, the guys behind the equally excellent Rez HD - is phenomenal. It looks as gorgeous as I remember the PS2 original seemed when it first came out. The controls seem identical to me (I don't have a Move controller), and the music's perfect for the visuals.

I still almost-hate the voice sound effects and the inability to skip cutscenes is frustrating in places, but I'm sure as I get further into the story and start encountering bits for only the second time - rather than the third or fourth - I'll be less desperate to get past a piece of exposition.