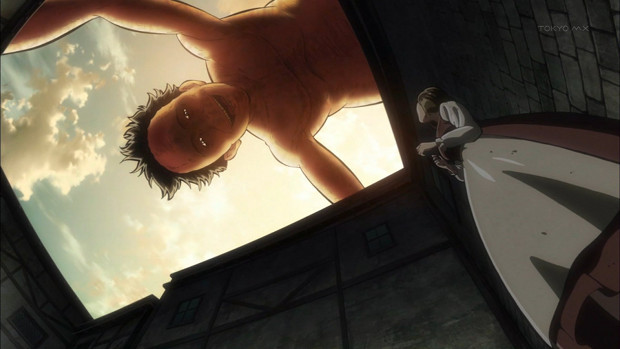 I'd been hearing rumblings of this show's greatness for a few weeks, but it only popped up on Crunchyroll a couple of days ago. The promotional video I did see hadn't really sold me on the concept; there's something about the art style and character designs that are really putting me off (although I like the chunky outlines). Also, the giant skinless naked guy seemed a step too far.

Bottle synopsis: a hundred or so years ago, the Titans - humanoid giants varying in height between 10 of 20 metres - appeared and started eating humans, who retreated inside three concentric circular 50m walls which proved impervious to the Titans (you can see where this is going, I'm sure). Just as humanity was getting complacent, a new Titan showed up and started wrecking up the place, providing the other giants with a route into the humans' stronghold.

I'm now two episodes in and fairly intrigued. I'd fall quite short of declaring it the best anime of the season just yet - as a lot of commenters seem to be doing - but even though there are a lot of elements I don't like I've got to give the production staff credit for not pulling their punches. The first episode builds up to, and ends with, the death of main character Eren's mother. I kept waiting for them to cut away, and they did, and then they cut back and you see her get bitten in half.

It's pretty horrific in a number of other places, and uncomfortably so; I found myself wincing regularly as people got splattered by debris, or were just devoured by the Titans - whose rictus grins are their most disturbing feature in a long list of disturbing features. The pacing of the episode before the attack is definitely on the sluggish side, with a lot of slow panning to pad out scenes that ultimately feel kind of pointless. Hopefully the recon corps will make further appearances, as their setup would be a total waste of time otherwise and they're probably more interesting than many of the other factions.

I'm not sure I'd ever be able to recommend this show unless I ever meet someone who's looking for more in the "naked giant cannibal" genre. It's uneven and ugly in places, but its dedication to horrifying and unnerving the audience has earned it a few points in my book.