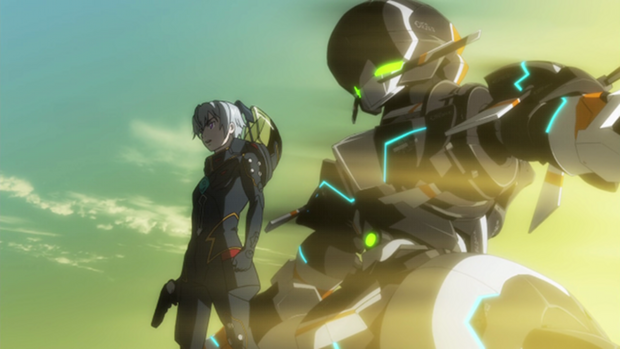 Only two episodes of Production I.G.'s new show, the awkwardly-named Gargantia on the Verdurous Planet, have aired so far, and I'm quite excited about it. It's a mecha show and I'm always cautious with the genre as it can get a bit dull and predictable, even with all the explosions, but there's a lot of promising threads being set up that I'm hoping pay off.

It starts off on a strong foot - a massive space battle with mecha, ships and an insectoid alien enemy all with a very strong Gunbuster flavour. It sets up a huge interstellar war with a history and huge stakes - and then the lead character drops through a wormhole, landing on a planet long since assumed dead.

It's been a pretty slow burner despite that early bait-and-switch; even at the end of the second episode it's still very much in character setup mode, introducing the characters to both the audience and each other - they still can't understand each others' language1. That second episode ends with the first real action scene (the space battle at the start of the pilot is kind of boring, if I'm honest), but it left a much stronger impression on me than I was expecting.

I'm hoping the characters in the show take a while to react to what's happened; it'd be a shame if, after taking its time moving the pieces into position for this chain of events, they get bored and skip past the aftermath of what amounts to a wholesale slaughter.

1 The way this is handled is great; when they're talking to someone who speaks the same language, they just use Japanese; when they're talking to someone who speaks a different language, it's a garbled mess (possibly the same garbled mess). It's a great, if simple, obstacle to overcome that complicates the early interactions; they can't just explain their positions and rush on with the story.