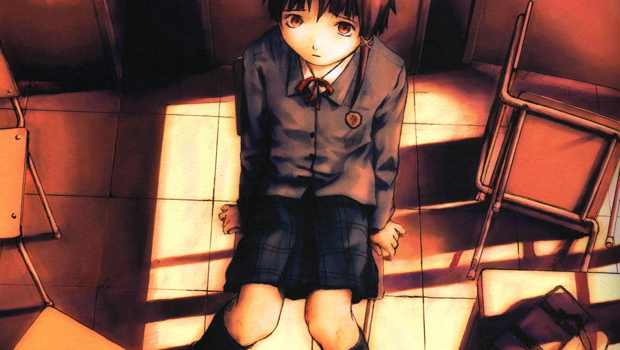 Over a decade ago, the first anime DVDs I bought were American imports - the Pioneer boxset of Serial Experiments Lain. The day it arrived, my two brothers and I watched the whole series on a PC in a bedroom in my parents' house, in a single sitting.

Until last week, I hadn't seen it a second time, despite a few aborted attempts at rewatches. I'm not sure why I found it so difficult to get into between the first viewing and now, but I was home on my own and having already burned through Puella Magi Madoka Magica at the start of the week I figured it was as good a time as any to park myself in front of a screen for five hours, and give Lain another shot.

The first time through, I realise now, I was not paying attention. I didn't really follow the story, couldn't understand much of the subtext, and missed many of the references and hints scattered throughout the series. It's an overwhelming show for the unprepared mind, and I certainly wasn't prepared.

This time, I had the benefit of a decade's worth of thinking, reading and talking about the show as a foundation, and a familiarity with the order of events that meant I could focus more on the philosophical aspects - but for the first eight episodes or so, I was still feeling incredibly out of my depth. It wasn't until "God" makes his appearance that the ideas started to gel together, and having reached the end (and thought about it for a few more days) I have a proper theory about the whole thing1.

There's still a lot of the show that feels like misdirection, though - and a few things that remain unexplained, even at the end. At least two thirds of the show is philosophy for its own sake and worldbuilding, bringing up more ideas than it ever intends to fully address - and remains totally unapologetic about it. It doesn't feel like those threads are abandoned or incomplete, however - while it's far from a "coherent" work, the questions you're left with are the same ones Lain herself faces throughout the show - and even she doesn't understand everything when the final credits roll.

I know I've got to rewatch it again at some point, with my theory in hand ready to see how well it holds up against the whole thing. I just hope it doesn't take me another ten years to get around to it.

1 I'm not going to post it here because spoilers.