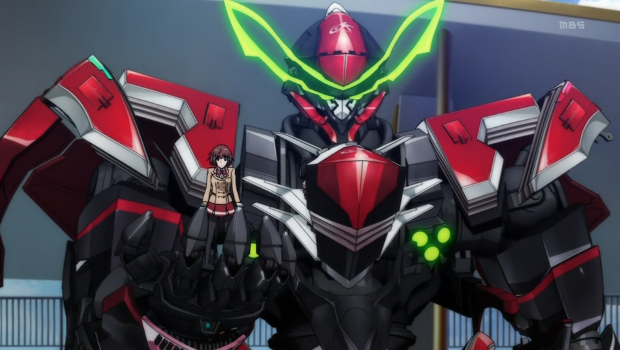 This is the story of teenage mecha-pilot body-jacking space vampires fighting immortal Space Nazis. In space.

Incredibly, that synopsis does not encapsulate half of the wall-to-wall batshit weirdness that is Valvrave the Liberator. I'm having a difficult time thinking of any other show that has taken quite as much pleasure from setting up a cliche and then taking a hard right to crazytown before it gets there.

The first episode opens like it's a high-school romantic comedy; if it wasn't for the mecha in the OP you'd be rightly surprised when it turns out that their school is on a politically-neutral space station and then under attack from the aforementioned Space Nazis for no adequately-explained reason.

Immediately after his primary love interest is hit by an enemy missile1, our intrepid hero, Haruto, climbs aboard a mech that suddenly appeared from underground, resigns his humanity2, and proceeds to slaughter dozens of the attackers with little remorse.

The episode ends when, after being shot and apparently killed, Haruto comes back to life and bites an enemy spy, taking control of his body.

Every time I've thought that I'm finding my feet in this show, it changes its game. The first few episodes are straightforward (..ish) mecha combat, but then there's a break in episode five where the students sing a pop song in an attempt to gain PR points with another country to help defend themselves against the Space Nazis. There's a Galactica-style detour into the political process of the newly-independent Module 77 when they hold elections. The enemy spy possessed by Haruto in the early episodes, L-Elf3 becomes a military advisor for the colony, against his former allies.

I wasn't sure that I liked the show to begin with, but the longer I've followed along the more intrigued I've become. At this point, there's only one episode left in the second season and no news of a third; I just have to find out how the hell they're planning to wrap up the story, let alone adequately explain a 200-year flash-forward from the start of the second season.

1 By the end of the second episode it is revealed that she pulled a Norwegian Blue and was, in fact, only resting - in the most disappointing anime resurrection since Attack on Titan.

2 When he first enters the machine, he has to answer "yes" to the question "Do you resign from humanity?" in order to start it; he is then given superpowers including immortality and the ability to take control of someone else's body by biting them.