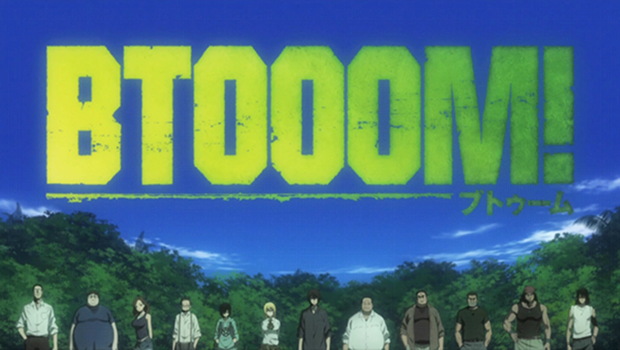 Unopposed recipient of the "Dumbest Title I've Ever Seen" award, and with one of the least likeable casts I can remember, BTOOOM! essentially boils down to "Battle Royale with a videogame tacked on". A group of random strangers are sent to a deserted island, given bombs and told to kill enough of their fellow hostages to earn their escape. No indication if multiple "winners" can emerge in a game, or how often players are refilled to replace dead or victorious players.

The game being played for real on the island is based on the hugely popular (in the story) online shooter BTOOOM! (hence the name of the show) and is being inexplicably run by the same company as published the computer game version, overseen by its lead designer, and livestreamed to a shadowy cabal of unidentified silhouettes.

A central part of the story is that everyone on the island was nominated by someone they knew in their "normal" lives. While there are (literally) a couple of ordinary, likeable people who've been dragged into the game, the majority of them are brutish thugs or sociopaths who would almost certainly have happily killed others in their everyday existence anyway. Plus the handful who were were actually remorseless murderers to begin with.

The bombs - referred to as BIMs (the acronym's never explained), come in several varieties, and every episode seems to introduce a new type. As of episode 9, there have been timed grenades, proximity mines, impact explosives, remotely-detonated traps, sound-activated bombs, smoke grenades and gas bombs.

The cast is constantly shifting as players die or escape from encounters, but nobody in the show is worth rooting for. The main character - hikkikomori online shooter nerd Sakamoto, who has conveniently high social skills for a shut-in - has a self-righteous streak a mile wide which comes primarily from his experience in the online game. This also means he's a strategic genius, with a Jack Bauer-esque knack for escaping hopeless situations.

The female lead Himiko - coincidentally Sakamoto's online wife from the BTOOOM! MMO - is a terrible mix bad stereotypes, swinging from terrified schoolgirl to man-hating killer to damsel in distress from episode to episode. I have a feeling a lot of my disappointment with her character "arc" so far is that she bears more than a passing resemblance to Marlene from Blue Gender1 but Himiko lacks the interesting traits and personality.

I don't know why I'm still watching this garbage. It's caught up with the manga so there's no end to the story in sight, and I'm highly doubtful that this setup is going to be interesting for much longer.

I blame Crunchyroll. It's almost as easy to keep watching this rubbish as it is to find a new, better, show.

1 Marlene is one of my favourite characters of all time. I really need to rewatch Blue Gender at some point; I don't think I've seen it through since it aired on SciFi back in the day.