This, for the record, is a map of the world in Skies of Arcadia - the numbers are "discovery" collectibles, but it's the largest and clearest map I could find for the purposes of this post: 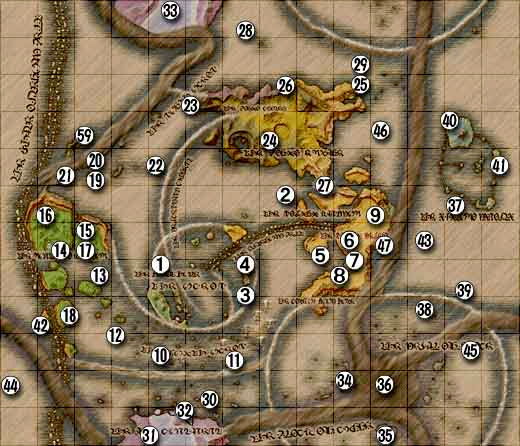 Just after the disc swap, you leave the country of Yafutoma, on the extreme right (west) of that map, to head back to your home base which is. To do so, you head further west, off the edge of the map and back on the other side, thus proving that the world is round. 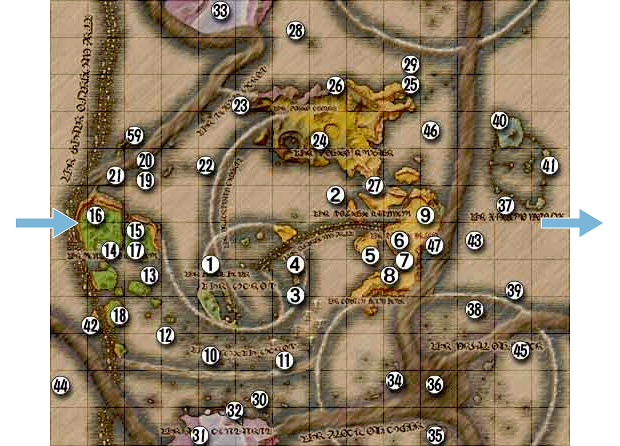 Hooray! So it's just like our own, right? Well, not quite. Because while the east-west loop is fine, there's an incredibly confusing feature of Arcadia's geography that really screws things up. 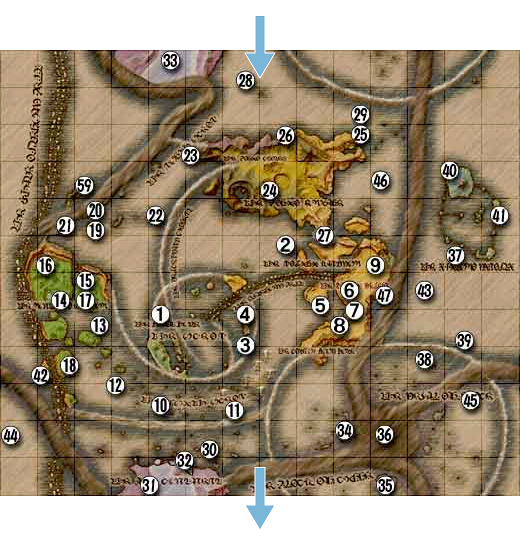 If you head off the south end of the map, you reappear in the north. "So what?", I hear you cry, "Our world loops around at the poles too!" Which isn't quite true. 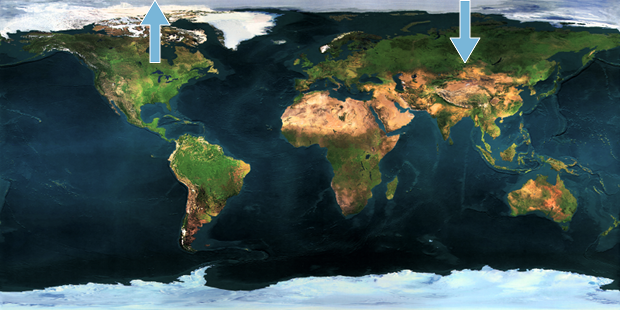 If you go off the top of a map of Earth, you're not teleported to the south pole with your heading intact. You keep going north until you hit the pole, then suddenly you're heading south. The north and south of a map of Earth aren't connected the way they are in Arcadia.

For clarity's sake, here's that first map again, but repeated so that you can see what's beyond each edge: 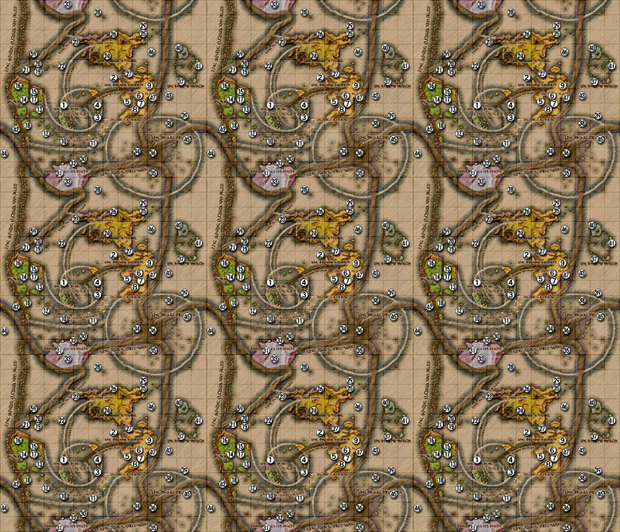 This makes it more obvious what's going on with Arcadia: there's only one pole, and it's at both the north and south ends of the map simultaneously.

So just what the hell shape is this planet? There are, in my mind, two possible answers, each with their advantages and disadvantages.

One, Arcadia exists in non-Euclidean space, where some kind of space/time warping causes the north and south to appear connected when in fact they aren't. This is slightly problematic because it implies that there's more to the world than this map shows; it's possible that this map is only a small part of the entire world, and could in fact be a tiny square contained in some kind of barrier that causes space to wrap around at the edges.

The biggest question with this idea is simply, why is it happening? Did someone - either an Arcadian or some external alien influence - set up this enclosure, or is it a naturally-occurring phenomenon? And when the planet is viewed from above - for instance, from the Great Silver Shrine - wouldn't you see the world beyond that border?

The other solution - my preferred option, just because it's more interesting - is that the planet isn't a spheroid at all - it's a donut shape. I sadly lack the graphical ability to provide a diagram, so your imagination will have to suffice.

Take the east and west sides of the map, and bend them together so that the world is a cylinder. Then take the north and south ends, bending the cylinder so that the "poles" are joined. You can now travel in a continuous loop along either the north/south or east/west axis, and follow the expected path1 across the surface of the flat map.

But this theory runs into trouble where the first succeeds: with the compass.

If the square map is just a part of the Arcadian surface, then the north/south compass direction will behave the way we expect; because you're warped from the "north pole" to the "south pole" when leaving the edge of the map, then you're still heading north. With the donut theory, there would have to be some point that acts as a magnetic pole for the needle to point towards - but this means that passing that point would cause a reverse in your heading.

Unless, of course, the magnetic field of the planet was generated by something in the center of the donut's "hole", throwing out flux lines parallel to the donut. The compass needle would then always point along the flux lines, maintaining the heading. But this is assuming the compass uses the same technique to find north/south as the ones used on Earth2; its reaction around Discoveries suggests it might be an entirely different system.

Or maybe I'm just overthinking something that really isn't important.

1 More or less; there'll obviously be some slight differences in distance around the inside and outside of the donut.

2 There are some discoveries that strongly suggest Arcadia is Earth, but at some point in the far future; presumably at some point we're going to gain a few more moons.