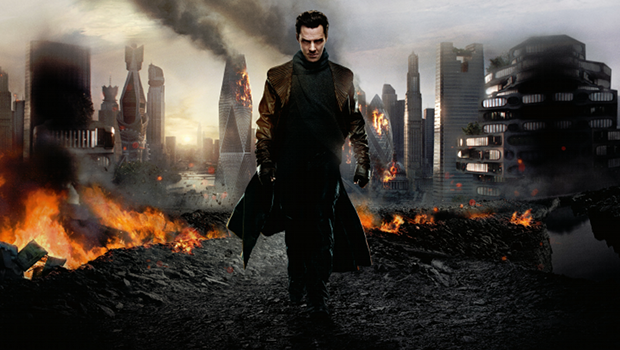 I wasn't a fan of the 2009 Star Trek reboot. To be fair, I was never what I'd call a fan of any previous incarnation of the franchise, but I could always see the core of TOS or TNG that got people invested and why they loved them. I think I just came to Trek too late, and couldn't quite get past the cheese. And it always bugged me that, along with capitalism, the Federation seemed to have abandoned the concept of personal space1.

JJ Abrams, on the other hand, seems to only have absorbed Trek through its memetic impact. He knows the broad story beats that have made their way into our shared cultural shorthand and recognises the broad character strokes, but the resulting patchwork of a universe he's created in the rebooted movie series is missing the thematic depth that I've always been told that Trek had.

But there are people with better knowledge of the franchise than I, and they're in a better position to point out the flaws in Abrams' characters when put against their 2009 incarnations. So I'm going to avoid talking about why Kirk's cheating of the Kobayashi Maru is wrong and stupid - but let it be known: it's really f--king stupid.

My primary problem with Star Trek 2009 is best illustrated by Kirk's narrative arc. Or more accurately, his lack of one. He never does anything that suggests he's leadership material, but by the end of the film he's given command of the Federation's flagship starship and without changing his abrasive attitude somehow wins over Spock. He's the same guy at the end of the story as when it started - and the only reason the audience can ever buy that "development" is if they're willing to accept from the beginning that Chris Pine's Kirk is Captain Kirk. It was always a foregone conclusion, but surely a story could have been devised where his meteoric rise through Starfleet ranks was earned?

Star Trek Into Darkness does nothing to address that problem. It tries to pretend it does, after the pointless opening volcano section2, but Kirk loses his command of the Enterprise for all of an afternoon before Pike's death causes him to give an impassioned speech about how he should be given the ship back to go on a reckless quest for vengeance. That he's given the go-ahead is further evidence of the scriptwriters' apathy for believable characters.

Probably the worst culprit in the nudge-and-wink-to-TOS gallery - no small feat - is the reveal of Benedict Cumberbatch as Khan. His announcement - "I am… Khan!" - is shot, scored and delivered like the audience has already heard the name and knows its significance. Which isn't as iron-clad a guarantee as Abrams has apparently assumed; surely there are plenty of people in the audience whose introduction to the franchise was the 2009 reboot? They'd never have heard the name in context before.

Khan's not even essential to the story. He could be any genetically-engineered super-soldier, but God forbid they pass up the opportunity to have someone shout out his name at an appropriately dramatic moment. Into Darkness gives that dubious honour to Spock, moments after Kirk "dies" - and the heavy-handed reference robs the moment of almost all its drama.

But that's not the worst thing about Kirk's death. In his first ever genuinely selfless act, Kirk enters the Enterprise's warp core to restart the ship's engines and save his crew. It's the desperate act of a man who has finally learned to put others before his own impulses and is willing to do anything to save them. But the sacrifice is cruelly undercut by the obvious foreshadowing of the regenerative powers of Khan's blood. We know from the second Kirk enters the room that he's going to die, but it's a foregone conclusion that they'll be able to bring him back. So who cares?

It's the one part of the film that's properly set up and that deserves and delivers its emotional punch - or it would, if we didn't know it was a fake.

Almost every major moment in the film is a callback to some aspect of the original series, but it's all been robbed of the context that made it important. We're assumed to care because we recognise these memes; we're expected to feel good or feel bad or laugh or cry because we remember why the original made us - but Star Trek Into Darkness makes no effort to make us feel those things on its own merit.

1 I don't know if this was the case in TOS, but I was always struck by how close together people stand when talking in Next Generation. I know it's probably due to a 4:3 aspect ratio and small TV sets, requiring characters to be quite large but also wanting to show them both in frame.

2 Nothing is done to make me give a damn about anybody before they're in danger. Like the first film, there's a staggering assumption that I already know and care about the characters before I sat down. But almost worse, since it's only the start and I've seen the trailers, I know that Spock's not in any real danger.