The most interesting thing I've been up to lately: I've made (and released) an app for the Palm Pre. It's a search app for the Wizards.com D&D 4e Compendium (if that doesn't mean anything to you, then you might as well skip the rest of this entry), which I put together for two reasons:The second one is probably the bigger impetus; with any other phone or device, I'd probably have waited for someone else to (never) make what I wanted, but this is the first time I've been in a position to do it myself so I figured I should probably take the opportunity. 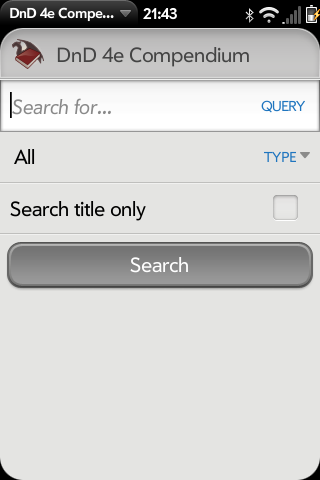 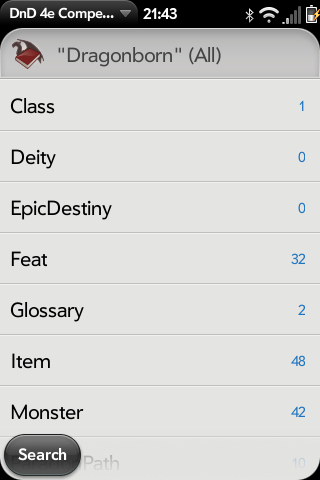 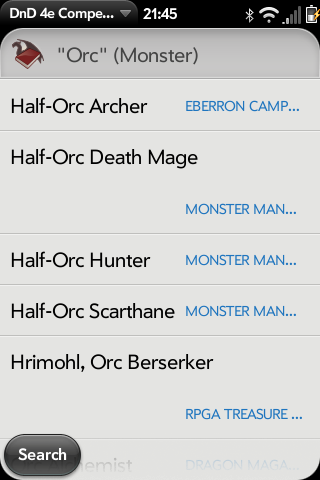 These screenshots are actually significantly out of date; I've just finished the first pass on my second round of features, so it does a ton more now than it did when it went online last week. I'm hoping to test it more thoroughly over tomorrow and during a D&D game on Wednesday night.

I've done some minimal promotion, on the D&D forums and Twitter, and at the time of writing it's been downloaded 89 times, which is way better than I could ever have hoped. If anybody reading this has a Palm Pre or Pixi (or if you know someone who does!), you can download it here - although if you wait til the weekend, the newer version will hopefully be available then.

This is actually the second app I've written for the phone, but the first will never see the light of day for fear that I will be sued into oblivion for copyright infringement.

In other news: work is good; the Christmas holidays were over far too soon; we finally got a comfortable computer chair.