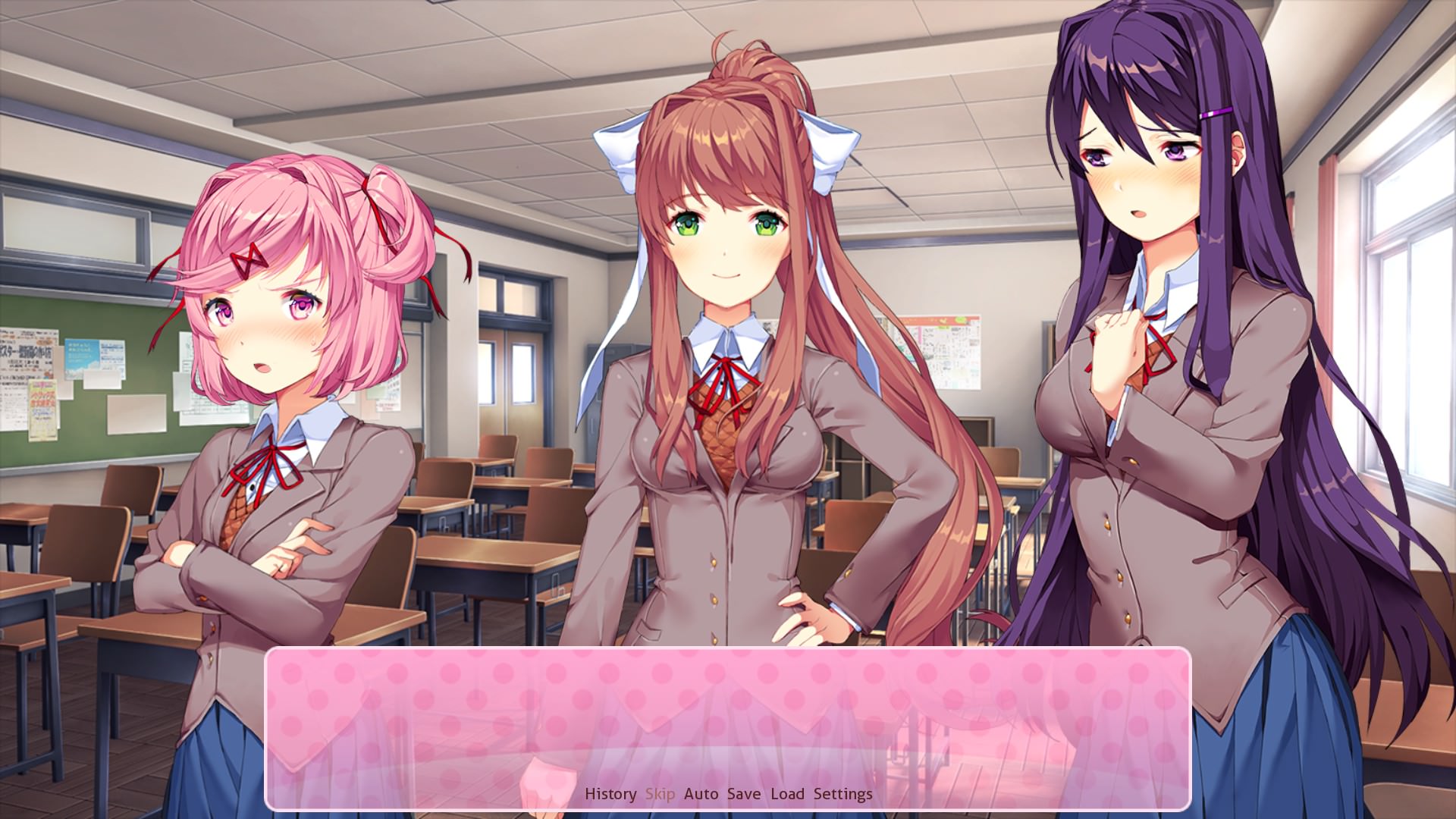 When it came out, The Beginner's Guide's question was asked so effectively that the developer was aggressively accused, by some players, of actually doing what the fictional framing device claimed: that he'd stolen someone else's work, packaged it up and released it without their knowledge or permission. (This is disproven by the final levels of the experience, where the narrator has something of a breakdown, which obviously wouldn't be included in a released product if The Beginner's Guide was actually what it initially claimed to be.) But its question was a fascinating one - what does the creation and consumption of virtual worlds do to the people who create and consume them? What do the worlds we create say about us, versus how much of that meaning is projected from the consumer?

Doki Doki Literature Club is more about the effect that fictional worlds have on the people who inhabit them. It becomes apparent at about the halfway point that the events of the game are being manipulated by someone within it; at first it seems like there'll be an in-fiction reason (I was expecting some supernatural or parallel-worlds explanation), but eventually the fourth wall isn't broken so much as demolished, and the villain (for want of a better word) sits in the ruins of the game's remaining assets, facing you, the player - not your character - confessing her love and demanding that she be allowed to fall in love for you. No route was written into this world for her, so in her jealous desperation she has changed and even deleted the game's code to give her the chance she feels she deserves.

It reminds me of last year's Re:Creators, which almost asked a similar question about how the inhabitants of our fiction would react when facing their authors. But where Doki Doki Literature Club changes tack is that it's seemingly unconcerned with the role of the author. In most cases this would be fine; the player's the one making decisions after all, and a minor character in a dating game jealous of her co-stars' success makes a kind of sense if you're breaking the fourth wall this way.

The slight issue I have, though, is that Monika is never intended to have a route in the game as written. It's not player choice that leaves her unfulfilled, it's the developer's deliberate design. But then, by the time you're playing the game, she doesn't have the option of engaging her creator; tearing at the fabric of her reality and rearranging it, manipulating her friends' deepest fears and weaknesses to make them less palatable - or outright deleting them from the game - is the only course she has left available to her.

I don't know that there's some deeper lesson to take away from Doki Doki Literature Club. When The Beginner's Guide ended, its message was pretty clear: beware the fine line between intent and interpretation, because sometimes the psychology we think we see is our own.

Until we reach a point where our virtual characters are actually aware of their predicament - which I sincerely hope we're not, yet - then, no matter how much they may seem to protest at our treatment of them, we've not got much to lose sleep over.

But then why do I still feel so sorry for Monika?