I don't know whether to be annoyed or happy about this.
No comments:
Tags: Images, Mobile

This photo leapt out at me from a series of beautiful, yet tragic shots of the Californian wildfires. This one just took my breath away - I don't want to sound flippant but it looks unreal, pretty much exactly like a screenshot from Fallout 3. Which is supposed to be set in apocalyptic wastelands 200 years after a nuclear holocaust. Life imitating art. Very scary. 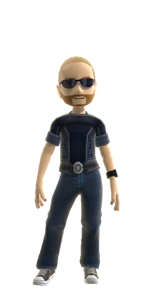 On Friday evening (the night before I headed to Glasgow for two days to attend Auchinawa), I got into the preview program for the New Xbox Experience. I basically just had time to create my avatar (see below) and install a couple of games to the HDD before we had to leave, so I've not had much chance to get into the nitty-gritty details of the "experience", but it seems like an improvement in a lot of ways.

I'm not sure the new placement of some options is as intuitive - changing your theme is now located under your Xbox profile rather than the system settings - but it kind of makes sense since it's not a global setting for the entire machine.

Still, I'm sure after a couple of weeks using it this second iteration of the dashboard will be as easy to get around as the old one was.

I was pretty impressed at how well I was able to create myself with the avatar system though - compared to any other character creator I've ever used, none of which has ever been able to create even an approximate likeness of myself, my Avatar is frighteningly close to how I actually look. I don't know if everyone else will be as fortunate, though - my girlfriend wasn't able to make one that's as accurate.
No comments:
Tags: Games, NXE, Xbox

We've now been in our new house for nearly two weeks, and it's still getting more messy rather than less. There's still a few things in the self-storage box that we've got to transfer out before the account runs out at the weekend, but I don't know if the living room can take much more.

For instance, here's the change over the course of a few hours of yesterday:

The box is nearly cleared out though; we should be able to fit the rest of it into the car for the trip home tonight, or if not then we'll definitely be clearing it out tomorrow.

One slight problem is that the back bedroom, which we'd been planning to use as a storage area for a while, is going to be out of commission for at least another week while we repaint it a colour a little more muted than its current bright pink.
No comments:
Tags: house, moving, personal, Rambling

I was pretty close to using "I'm gay for Keith Olbermann" as the title for this post, but it seemed a little too flippant for the seriousness of this issue.
No comments:
Tags: prop 8, Video
Newer Posts Older Posts Home
Subscribe to: Posts (Atom)